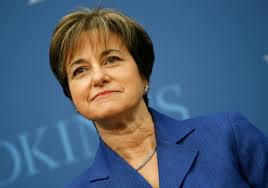 Born March 17, 1953, Woertz has a Bachelor of Science in Accounting from Pennsylvania State University.  Upon graduating she worked at Ernst & Young, then moved to private enterprise, first as President of Chevron International.

After spending 29 years working her way through the executive ranks of the male-dominated oil industry, Woertz had served as chairman of the board of directors, president and chief executive officer to one of America’s largest companies, Archer Daniels Midland Co since 2006.

Woertz’s coveted post at ADM, a company with $36 billion in revenue, ensures her continuing status as one of the most powerful woman in the world!

Certainly, in 2010, she was ranked the third most powerful woman by Fortune magazine.  In that same year, Woertz was also appointed to the President’s Export Council by President Obama.

Woertz is an inspirational Pittsburgh executive who broke through, shattered really, the glass ceiling, and is proof that ability and experience are all that counts in the  modern corporate world.   Her expertise and contribution to American business are exciting to watch.