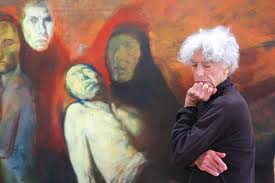 Rappaport attended the Carnegie Institute of Technology (now Carnegie Mellon University), where he obtained where from a Bachelor of Fine Arts in Painting and from 1964 studied under the guidance of Robert L Lepper. In 1981 Rappaport received a Master of Fine Arts from Brooklyn College.

From his early days as a student, Rappaport has been honored for his impressive work and artistic abilities.  In 1962 he won the National Gold Medal in Drawing in the National Scholastic Art & Writing. In 1968, Rappaport was awarded the Chaloner Prize through the Rome Prize competition, a prestige award allowing a three-year residency at le Cité Internationale des Arts in France.

From 1973 until 1985, this Pittsburgh artist based himself in New York. Rappaport returned to Pittsburgh in 1985, where he has remained since, and has been a huge influence on the local art scene.

Rappaport is a classically trained painter of portraits and large-scale figurative works.  Rappaport is known to push his images to the point of abstraction, and to use his iconic figures in his paintings. He has also written many papers on artistic technique, theory and inspiration that have been well-received.

For more than four decades Rappaport’s work has been nationally and internationally exhibited.  Rappaport regularly holds solo exhibitions, where is work is well received.  His first exhibition was in 1966, and his latest, in 2011, entitled “Rappaport Unblurred”, at the International Children’s Art Gallery here in Pittsburgh, was a huge success.

This Pittsburgh artist enriches the community with his beautiful art work, shared through galleries, his generous offering of views in art publications and pappers, and his participation in the art community in general.